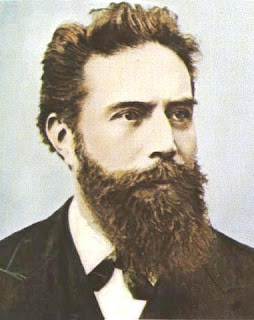 Wilhelm Konrad Roentgen, the man who discovered X-rays, was born on March 27, 1845 in Lennep, in the state of Prussia. His father was a German farmer and his mother was Dutch. He took primary education in Holland and for university education he went to Zurich University, Switzerland. Here, he had the opportunity to work under the famous scientist, Rudolf Clausius. Roentgen’s favourite subjects were electricity, energy, light and elasticity. After receiving his doctorate in physics, he was appointed assistant professor at Wurzburg. He also taught at other universities in Germany and then returned to Wurzburg in 1885 as professor of physics.

Now, Roentgen had better equipment to produce high vacuum in the tube. Besides, he had a good assistant too, who was an expert glass blower. He would heat the glass tubes and produce desired shapes out of them. He prepared a tube with two electrodes and created near vacuum in the tube. He connected both the electrodes to a high voltage supply. He noticed that rays were produced near the negative electrode. Further study of the rays revealed that they could produce a shadow of the object kept in their path. They even forced a paddled plate to rotate that was kept in their way. When they hit glass they produced green coloured flourescence or glow. These rays, called cathode rays, were deflected by electric and magnetic fields.

Crookes’ cathode rays consisted a stream of electrons. Roentgen tried to further Crookes work from here. He covered the Crookes tube with a thick cloth. In a Crookes tube, the cathode rays traveled from the negative electrode to the positive electrode or anode. He inserted a blade of tungsten as a target between the anode and cathode. When the cathode rays in the tube were deflected after hitting the target, they came through glass and produced images on the photographic plate placed nearby. Roentgen thought that these rays were different from the cathode rays obtained by Crookes, as cathode rays could not pass through glass. Roentgen named these unknown rays ‘’X-rays’ His friends and associates called them Roentgen rays, but later they came to be better known as X-rays. He studied these rays more closely and discovered that even through the photographic plate was wrapped in black paper; the X-rays penetrated it producing the image of the palm on the photo-film. He concluded that these X-rays had the power to penetrate the flesh of a living being. However, they were unable to penetrate the bones as was proved by the image of the palm.

When Roentgen announced his invention and demonstrated it in the assembly of Wurzburg Medical and physical society in December, 1985, experts present in the assembly immediately realized the importance of X-rays in medicine and other fields. It surprised many that Roentgen’s X-rays could penetrate the human flesh. To celebrate Roentgen’s discovery, a dinner and dance party was organized. Many women stayed away from the party, lest the X-rays showed them without clothes in the party.

Gradually, with the spread of information about X-rays, people realized their utility. The misunderstanding regarding the rays also vanished. For his discovery, the Royal Society honored him by awarding him the Rumsford award in 1896. Roentgen was awarded the Nobel Prize for Physics in 1901, which was introduced in the same year. Today, X-ray has become extremely useful in detecting fracture in bones, Surgery, etc. They are equally useful in the study of the internal structure of metals and other scientific researches. X-rays were discovered by the end of 1895 and soon followed the discovery of radioactivity by Becquerel and many other important discoveries by some of the greatest scientists like the Curie couple, Rutherford, Planck, Einstein, Fermi, etc. 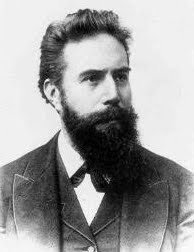