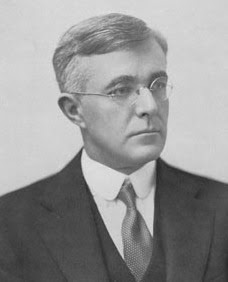 Irving Langmuir was born on Jan. 31, 1881 in Brooklyn, New York, USA. His elder brother Arthur played an important role in Irving’s progress. When Irving was nine years old, to sustain his interest in science, Arthur thought of setting up a small laboratory for him. At the age of 11, Irving joined school in Brooklyn. Within a year, his father was transferred to Paris and Irving had to be admitted at a French boarding house in Paris. He loved the school as he could spend as much time in the laboratory as he wanted to. When his father was transferred back to America, he took admission at Pret Institute of Brooklyn where Arthur was an instructor. Besides, he worked in a factory as a chemist. Irving started living at his brother’s place then.

Under such favorable environment he was able to gain more knowledge. He excelled in chemistry and calculus. He used to read all available science magazines and books. Through he lost his father at 17, he never faced any financial problem. In 1899, at the age of 18, Irving got admission in Columbia College. Here, students were given special training related to mine industry. Irving received training as a metallurgical engineer. For further studies, he again went to Europe to study at Gottingen University, Germany for three years. On completion of his studies, Irving was appointed as professor at the Technical Institute in New Jersey. He had a few other offers, but preferred this institute as he would have the freedom and additional time for conducting research. 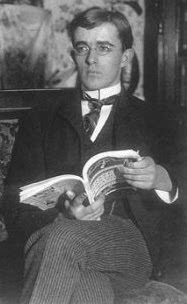 During the summer vacation of 1909, he got an excellent opportunity to carry out research. A newly established laboratory at New York invited Langmuir for research in the vacation batches and he happily accepted it. Here, he got an opportunity to study tungsten wire used in the electric light bulb. This wire had a short life span as it would burn out very fast. Langmuir conducted research to find the reason behind it. The vacation came to an end, yet he was unable to complete his research. He was requested to continue at the institute as a staff member till the research was over. He accepted the invitation and also got the permission to conduct research on other independent projects simultaneously. Here, he proposed the concept of ‘Pure Research’ which was readily accepted. The vice president in charge of research at the General Electric Laboratory, Willis Rodney Whitney was a visionary. He recognized the importance of Langmuir’s research and readily cooperated.

Langmuir devised a special mercury vapour pump, which could suck out all the air from a bulb, producing a high vacuum in it. He also discovered that some inert gases like argon did react with hot tungsten. The tungsten wire could now be used for longer time. If inert gases like nitrogen or argon were vacuum packed in a tungsten wire bulb, its life could be further extended. This discovery was beneficial to both, the bulb manufacturing companies and the customers. During the same priod Langmuir announced another invention-atomic hydrogen torch. He observed that at a very high temperature, i.e. at the melting point of the tungsten wire, hydrogen atoms got separated (fission). Moreover, when these atoms were reunited (fusion), energy was released. Based on this principle, Langmuir developed the atomic hydrogen torch in 1927. One could weld metal at the temperature of 6000 C with this torch which made welding job comparatively easy. 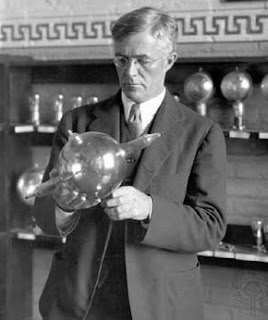 Even after such a great success, Langmuir was not satisfied. Now, he wanted to know why some elements like argon and helium were inert, while elements like hydrogen and chlorine were active. He began study of the structure of an atom. He possessed sound knowledge of chemistry, physics and mathematics. The atomic number of hydrogen is one. One electron revolves around its nucleus and this orbit is incomplete. The atomic number of helium is two and two electrons revolve around its nucleus in an orbit and the orbit is complete. Neon, the gas on which Langmuir had worked a lot, was an inactive or inert gas. It’s atomic number is ten. It has two electrons revolving in an orbit closer to the nucleus and eight electrons revolving in an orbit away from the nucleus. Neon is inert. The atomic number of Chlorine is seventeen. Out of seventeen electrons two revolve in the first orbit, eight revolve in the second orbit and the remaining seven revolve in the third orbit. The third orbit is incomplete. Chlorine is active because it tends to accept an electron to complete its outer orbit. Atoms of hydrogen and chlorine can share one electron from their outermost orbit. This is the reason why hydrogen easily combines with chlorine to produce hydrochloric acid. Langmuir’s findings about chemical activity were accepted all over the world. He was awarded the Nobel Prize for Chemistry in 1932. He was the first to use the terms electrovalence and covalence.

He studied various other aspects. He studied certain chemicals for their colours and other external features, a study known as surface chemistry. His studies led to answers to certain basic questions like why certain substances dissolve in water and others do not, why some atoms float on the surface while others sink. His study helped in understanding of some features of catalysis. The General Electric Company appreciated Langmuir’s work and appointed his Vice-chairman of the company. He would travel abroad during the summer vacations with his family. At work, he spent every moment in research. Thereafter, he also carried out research on the Weather and artificial rain. He would create artificial rain in a limited area by sprinkling silver iodide over the clouds.

He retired in 1951, but continued as a guide and adviser to the company as well as to the government. He died in 1957. He spent all his life for the world of science. Apart from the Nobel Prize, he was awarded and conferred upon several other prizes and honours by many scientific institutions.