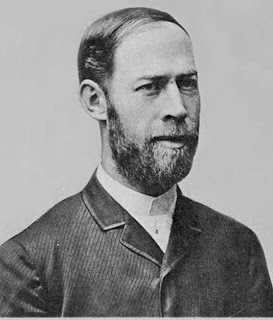 Heinrich Rudolph Hertz was born on February 22, 1857, in a well-to-do family in Hamburg, Germany. His parents began his education with the intention of shaping his career in architecture and engineering. But soon they realized his interest in pure science and research. He was a curious child with a habit of observing and learning about new ideas and things. Heinrich joined Berlin University, where a person of rare intelligence, versatility and multifaceted personality – Professor Hermann Von Helmholtz, taught various subjects like physiology, anatomy, physics and mathematics.

Hertz learnt a lot under the able guidance of Helmholtz. At the same time, Helmholtz also realized that he had a very talented pupil in Hertz. Both reciprocated each other with satisfaction. Hertz graduated in 1880 and was soon appointed as his deputy by Helmholtz in his research work in physics.

In 1883, he was appointed professor of physics at Kiel in Northern Germany. He joined it and worked on Maxwell’s electromagnetic theory. The theory of electromagnetism was first published in the form of an essay in 1865. Many of the present day advancements in science are based on this theory. Hertz’s initiation into research brought him fame and provided him a new direction in research. He now concentrated on the experimental study of implication thought out the maxwell’s mathematical equations. He wondered if electromagnetic waves could also travel like light waves. He also began to visualize on the experiments that could be conducted on the subject. Meanwhile, he joined Karlsruhe Polytechnic as professor of physics. Now he thought of conducting research on the production and propagation of electromagnetic waves. He wondered how much time it would take to propagate such waves from one place to another and how to accurately measure such a small interval of time? 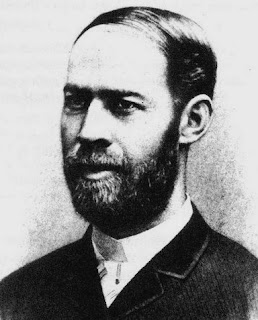 Heinrich constructed the world’s first radio transmitter and radio receiver for the purpose, generating radio waves. Prior to this no one had heard about it. Hertz’s equipment later laid the foundation for invention of the modern radio, radar and television. He conducted his experiments in a small 10m X 10m room. A wave traveling from one end to the other and back covered a distance of 20 meters. It was very difficult to measure the time taken by the wave to cover this distance as it was expected to be less than one microsecond. A brilliant idea struck him – a Leyden jar could be used for the pupose. A Leyden Jar (a type of capacitor) could be used as an instrument to measure time because the electric discharge that took place between two points was a very fast process. Another thought that struck him was that there could be some conductor, which could produce electric discharge.

Hertz demonstrated the production and propagation of radio waves (electromagnetic waves of long wavelength). Next, he wanted to prove that however brief, a wave took specific time to another point. For this he once again returned to sound waves and dwelt on Helmholtz’s work. Waves originating from the same source but reaching destination by separated paths could either be weak or very powerful. In terms of frequently modulation one can call them constructive or destructive. As the receiver moves from one point to the other, the vibration will cease at a certain nodal point which in scientific terminology is called destructive interference. The distance between two such points is equal to half the wavelength. Hertz succeeded in measuring the wavelength of an electromagnetic radiation using the phenomenon of interference.

In 1889, at a meeting held at Heidelberg, the Association for the advancement of Natural Sciences described and discussed Hertz’s experiments and findings. Researchers and scientists present at the meeting lauded his efforts. At the age of 32, Hertz was appointed professor of physics at the University of Bonn. Hertz met an untimely death, due to blood poisoning, at the age of 37 in 1894. The SI unit of frequency, the Hetz (Hz), is named after him.