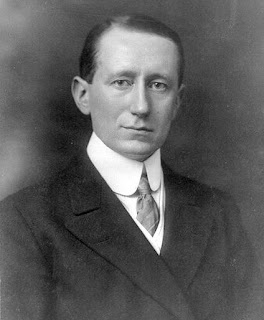 Guglielmo Marconi was an Italian scientist and inventor, known for his development of Marconi’s law and a radio telegraph system, which served as the foundation for the establishment of numerous affiliated companies worldwide. He was born on April 25, 1874 in Bologna, Italy. He belonged to an affluent and cultured family, which provided him with the best of education. Marconi was a talented and polite child. Right since school days he carried out experiments and he preferred electrical experiments the most. He was allotted a room in his house which he converted into a laboratory. The room was scattered with wires, poles and tin containers. The enthusiastic youngster spent hours in this laboratory.

When this discovery was being discussed in the scientific world, Marconi was just 15 years old. Once, he took his father into his small laboratory to demonstrate his experiments. He rang an electric bell fixed 15 feet away with such waves. His father appreciated his efforts saying it was a short distance and told him that he should try to cover longer distance. Morconi continued his experiments with keen interest. He hung one wire in the air and buried another wire in the ground. He sent a wireless message up to a distance of about a mile. He felt that he had achieved something remarkable, but he also felt that the people of his country were not able to recognize his genius. So Marconi left Italy and arrived in London. He consulted an officer in the department of electricity and exhibited his findings. The officer was very much impressed with the work done by this young man and promised him all help. 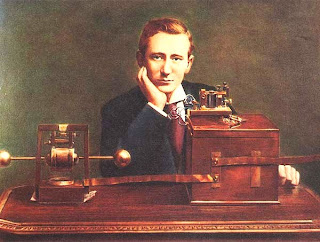 Encouraged by this response, he arranged for a public demonstration of his experiments on the terrace of London’s General Post Office. People applauded his innovative idea and London newspapers the next day were full of praise for this young Italian. Professor Sir Jagadish Chandra Bose (1858 – 1937) of India, However, had already experimented on production and propagation of electromagnetic waves, in 1895. Bose was appointed professor of physics at the Presidency College, Kolkata (Calcutta). He had very limited means and facilities. But he used to make his own equipment out of the scrap available in market. He even had to spend his own money on these experiments. He carried out the experiment on production and propagation of electromagnetic waves in 1884. He demonstrated his discovery in the presence of the British Governor at Town Hall, Kolkata. The waves traveled a distance of 25 meters. A London periodical published two of his research papers. In 1895, he was invited by Royal Society to London, and there he demonstrated publicly the production of electromagnetic waves relaying them through concrete walls. Thus, London had viewed these demonstrations even before Marconi showed them. Bose was invited again for demonstration in 1896, this time in the presence of great scholars including Lord Kelvin. London University awarded him the degree of Doctor of Science based on his research papers published earlier.

Jagadish Chandra, a simple man, never got his invention patented. Hence, the world did not take much notice of his important discovery. Soon, Marconi announced his invention and also secured the patent for the same. Marconi got all the credit for the invention as well as the Nobel Prize for Physics in 1909. Thus, Marconi came to be known as the pioneer of radio telegraphy. The news of this wonderful invention spread all over the world. The Government of Italy invited him to return home and promised all help required for his experiments. Marconi returned home and established a wireless station with the help of government grant. He could successfully send wireless messages to far away sailing naval war ships during the World War I. The Italian royalty also appreciated Marconi’s arrangement. This also fetched him more financial help. He could strengthen his infrastructure which resulted in longer distance propagation of the wireless waves, even across the English Channel. Marconi decided to establish a similar wireless station in Britain. He erected a 200 feet high tower. But before the station became functional, a cyclone razed the tower and other supporting poles to the ground. This did not dishearten Marconi. He decided to erect a 400 feet high tower and soon the wireless messages were transmitted in all the directions to a longer distance.

With his wireless waves, Marconi had served his motherland in World War I. Later on, he established his private and the world’s first radio station at Chelmsford. When Fleming invented the valve, radio receivers with valves were made available in the open market. And with the invention of the transistor after a few years the small transistor radio sets appeared in the market. Marconi was financially very well-off now. Many nations and scientific institutions honoured Marconi soon after he was awarded the Nobel Prize. In 1929 the king of Italy honoured Marconi and his heirs with a pride of place in the royal court. Fortunately, his father Giuseppe lived to witness all these laurels won by his son. In 1927, 53 year old Marconi married 23 year old Countess Maria. Three years later Maria gave birth to a daughter. In 1933, the Marconi couple set out on a world tour. Marconi died in 1937. We can not imagine a world without wireless today. Truly, the credit of enabling us to communicate rapidly through his invention of the wireless communication goes to none other than Marconi.