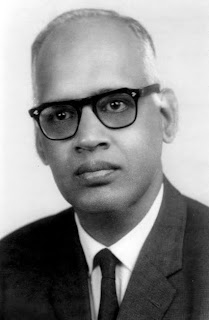 G. N. Ramachandran was one of those scientists who have made India proud by their research. His full name was Gopalasamudram Narayana Iyer Ramachandran. He was the first person to propose a triple-helical model for the structure of collagen. He also made other major contributions in biology and physics.

Professor Ramachandran was born on October 8, 1922, in the town of Ernakulam, Kerala, India. He was the son of G.R. Narayana Ayer and Lakshmi Ammal. His father was a Professor of Mathematics at a local college and thus had considerable influence in shaping Ramachandran’s interest in mathematics. He obtained his Bachelor degree in science from St. Joseph’s College in 1942. He also got a master’s degree in Physics from Madras University with his thesis submitted from Bangalaore (he did not attend any Madras college at that time). He subsequently received his D. Sc. degree in 1947. after that he spent two years at the Cavendish Laboratory in Cambridge, where he got his Ph. D. for studies on X-ray diffuse scattering and its application to determination of elastic constants’ under the direction of Professor Wiiliam Alfred Wooster, popularly known as W.A. Wooster, a leading crystollagraphy expert in the world.

After completing his Ph.D, he came back to India and joined Indian Institute of Science, Bangalore India in 1949 as an assistant professor of physics. In 1952 he was appointed to Madras University as professor and head of the Department of Physics where he continued his work on crystal physics. Dr. Ramachandran was devastated after the death of his wife Rajalakshmi in the year 1998, and a gradual deterioration in health occurred. During the last few years of his life he suffered a stroke and was affected by Parkinson’s disease. Ramachandran died on April 7, 2001, in Chennai, at the age of 78,

and left behind him a legacy of scientific discoveries. Leading scientists including Professor Linus Pauling and Sir Francis Crick regarded Professor Ramchandran as a Noble Prize caliber scientist of great reputation.

1) Discovery of the triple helical structure of the connective tissue protein called collagen.
2) Development of the theory of image reconstruction from shadawgraphs (such as X-radiograms) using the Convolution Technique.
3) Ramachandran received a number of national/international awards.