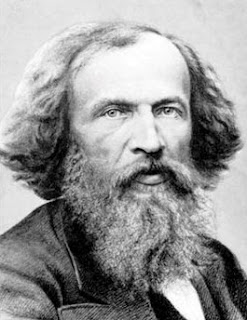 Dmitri Ivanovich Mendeleev was a Russian Chemist & inventor. He is credited as being the creator of the first version of the periodic table of elements. Using the table, he predicted the properties of elements yet to be discovered. He was born on February, 1834 at Tobolsk in Siberia, in the eastern part of Russia. The Cazar was then ruling over Russia. His father was a director of the local school. Dmitri was the fourteenth and the youngest of the siblings. Theirs was one of the leading families of Tobolsk. In 1787, Mendeleev’s grandfather has set up a printing press. His mother belonged to the Tatar’s and was known for her beauty. Her family was also the first to start the glass-manufacturing factory.

Immediately after his birth, his father lost eyesight and so also his job. But his mother was very clever and did not lose her spirit. She restarted the closed glass factory belonging to her parents. This partly helped them financially. The political prisoners of Russia then were deported to Siberia to spend their long sentences. One of Dmitri’s sisters married a revolutionary of the December 1825 revolution. He was educated and was sent out of Tobolsk. After sometime, the glass factory was destroyed in a fire and finally it had to be closed. Learning of Dmitri’s thirst for education and his intelligence, his mother decided to continue his studies. Siberia then, had no reputed educational institutions. She then decided to shift the family to Moscow. Arriving in Moscow was an eye opener and here, he experienced difficulties that one faced in life. Not knowing Russian and speaking only Siberian, he was denied admission in Moscow University. He was 17 years when his determined mother moved the family to St. Petersburg. First thing she did was to teach Russian language to her son. Then she enrolled Dmitri in a Teacher’s training school where he learned physics, chemistry and mathematics. Though knowing only one language, he stood first at the graduation examination. 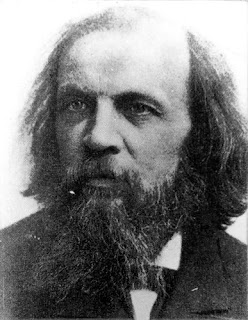 Dmitri’s health was not as good as it was earlier. He had problem with his lungs. Loss of his mother then completely broke his heart. The doctors expressed their fears that Dmitri would not last beyond six months. He then shifted southwards to Crimea having dry climate. He got a job of a science teacher. But in a short while, war broke out. Dmitri had to shift to Odessa and then to St. Petersburg. He tutored some students at home during his spare time and earned some money doing so.

During this period there was no avenue for progress in Russia especially in the field of science as there were no facilities for research. One had to seek permission of the authorities to study abroad. Mendeleev sought permission for studying at France and Germany. He reached Paris and got a job as an assistant to experimental chemist Henri Regnault. A little later, he established his small laboratory to conduct research at Heidelberg. Here, he came in contact and worked with Robert Bunsen, the inventor of the famous Bunsen burner, and another famous scientist Gustav Kirchhoff. The three got together to construct spectroscope. Spectroscope is used in analyzing light. It is also extremely useful in the study of analysis of chemicals. He attended the local Science congress in Germany. He was fortunate to hear the famous appeal of Stanislao Cannizzaro in favour of Avogadro’s work. Later, he utilized the atomic and molecular mass table of Cannizzaro. As a result, Periodic Table of all elements was constructed in the period 1868-69. This was the greatest contribution of Mendeleev- the Periodic Table of Elements. He got inspiration from here to construct the Periodic Table. After completing study tour of France and Germany he retuned to St. Petersburg. Finding a suitable match, he married only to divorce and settled down after remarriage. He also wrote a research paper on ‘Carbonic Chemical Studies’ in 60 days. Meanwhile, he wrote a thesis on water and alcohol mixture, which got him PhD. In 1865, when he was just 31, in recognition of his immense contribution and service to the progress of science, he was appointed the professor of chemistry at the Petersburg University. Attractive personality and a unique thirst for research led many students to seek inspiration from this young professor. His classes were always well attended. 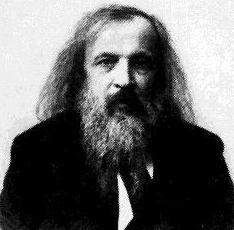 Scientists were then aware of only 63 elements. It was Mendeleev who gave the Periodic Table, his invaluable contribution. Due to its unique and useful layout, all elements were arranged according to their chemical composition and nature. All 63 elements were arranged according to their atomic weight. The first was the lightest element hydrogen and uranium was the last, being the heaviest in element then. He constructed the periodic table with elements set in seven groups according to regularity in physical and chemical characteristic properties of elements.

Then, Mendeleev concentrated on the gaps in the Periodic Table. He began searching for new elements missing in the periodic Table. He even predicted several of the along with their atomic weights. Among such elements were silicon, gallium, germanium and scandium that were discovered much later. The chemical characteristics predicted by Mendeleev matched exactly with those of the elements discovered later. This periodic table was regularly reviewed. Today, the elements are arranged according to their atomic number. Atomic number stands for the number of protons in the nucleus of an atom of the element. Atomic number of an element is nearly equal to the atomic weight or mass of the element expressed in grams.

Mendeleev died in 1907 at the age of 73 suffering from pneumonia. When he was only 21, doctors had warned that he would not survive beyond six months. But fate had other designs for him. At the time of his death, the number of elements in the periodic table had grown from 63 to 86. There are 92 natural elements. Apart from these elements, scientists have produced some new elements using nuclear reactions. The new element with atomic number has been named mendelevium after him. 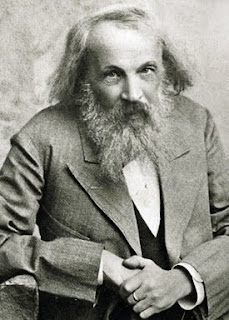 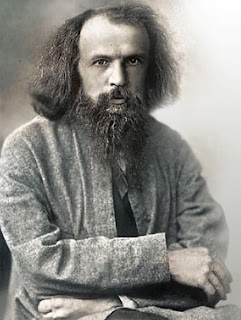